We Are Not Warriors in God’s Army
I deeply desire to be a believer who “thinks, meditates, and rolls His Word over and over in my mind.” So I was surprised when I first realized that nowhere in the New Testament is the Church referred to as God’s Army…never. We are called the Body, family, His building, Church, Bride, etc. But never His army. The angels are called His army but not us. He is the Lord of hosts (angelic armies).
The battle that eternally matters has been won. Jesus declared “It is finish” and embarrassed our adversary by complete defeat through His death and resurrection.
The Eph 6 reference to armor talks about our “struggle” against spiritual powers but it concludes with the purpose of our armor “…so you can stand.” Stand, not fight. Each piece of armor refers to what we must believe about Him and what He has done for and in us.
When Paul wrote that the “weapons of our warfare are not carnal” for the “pulling down strongholds”, the context shows he is referring to wrong beliefs built in our minds by our adversary. Paul uses the metaphor of a soldier to show how committed we should be and how others should give so some can “go.” Reading Acts, we know he was regularly “run out of town” when riots broke out but he never referred to it as a failure or “the devil won.”
I find it very interesting that when Paul said satan “hindered, blocked our way,” he didn’t fight but just went on rejoicing!
1 Thessalonians 2:18-20 TNIV
[18] “For we wanted to come to you—certainly I, Paul, did, again and again—but Satan blocked our way.”
Now imagine how we might react to that situation. It certainly “sounds” like the devil won. But the next verse shows that it simply didn’t matter to Paul because he lived in rest believing that God would make it all work together for his good. Here’s the next verse-
[19] “For what is our hope, our joy, or the crown in which we will glory in the presence of our Lord Jesus when he comes? Is it not you? [20] Indeed, you are our glory and joy.”
And Why Does This Matter?I suggest that the more we see ourselves as God’s army, the more we fall prey to a “works mentality.” We feel we must fight and then we view victory and failure through the lens of immediate circumstances. We begin to “lean to our own understanding” about the purpose for suffering and trials.
We start viewing suffering as direct attacks of the enemy and somehow a failure on our part. But James and Peter said we should rejoice in suffering and trials, not fight anything.
Then we starting looking at Old Testament verses to explain our view of warfare. War was real for them because they were setting up a literal nation and because Jesus had not yet “disarmed” all spiritual enemies.
Col 2:15 should be our foundational belief. “And having disarmed the powers and authorities, he made a public spectacle of them, triumphing over them by the cross.”
1 Peter 3:21-22 TNIV
[21] “… It saves you by the resurrection of Jesus Christ, [22] who has gone into heaven and is at God’s right hand —with angels, authorities and powers in submission to him.”
We are called to a life (not a day) of Sabbath rest, not warfare.I want to grow in my understanding of the Sabbath-Rest referred to in Heb 4:1- “Therefore, since the promise of entering his rest still stands, let us be careful that none of you be found to have fallen short of it.”
Hebrews 4:9-10 TNIV
[9] “There remains, then, a Sabbath-rest for the people of God; [10] for those who enter God’s rest also rest from their own work, just as God did from his.”
The war is in our minds where we must constantly be renewed so we believe the right things.
Jesus gave us a promise about the life He wants to give us-
Matthew 11:28-30 TNIV
[28] “Come to me, all you who are weary and burdened, and I will give you rest. [29] Take my yoke upon you and learn from me, for I am gentle and humble in heart, and you will find rest for your souls. [30] For my yoke is easy and my burden is light .”
Let’s pursue joy in trials, peace in suffering and the eternal reward of enjoying His complete victory! How? By fixing our eyes on Him, all He has done and all His Spirit of grace is doing inside of us right now!
“…fixing our eyes on Jesus, the pioneer and perfecter of faith.” Heb 12:2
This is not intended to be criticism of anyone but simply something to think about.
Mark
Is It a Mistake To Apply New Covenant Principles to Civil Government? 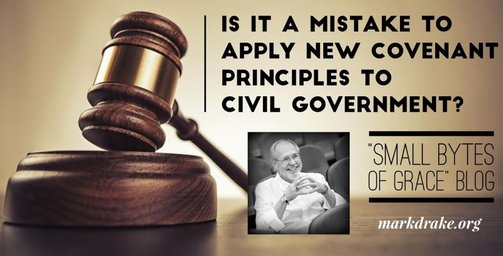 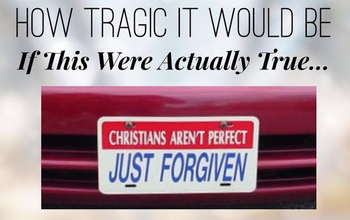 You’ve likely seen it on bumper stickers and throughout social media: “Christians aren’t perfect, just forgiven”. I’ve heard it in sermons and read it in books, “Christians aren’t perfect, they’re just sinners saved by grace”. The truth, the awesome truth is…this is simply NOT TRUE!
These statements may sound nice or somehow comforting when we struggle with our obvious lack of perfection. However, the sentiment is wrong, and a terrible way for any believer to think! And we should all be very grateful this kind of thinking is wrong because it strips the heart and soul out of true Christianity; it nullifies the mystery and miracle of the New Covenant. This kind of thinking turns the Kingdom of God into weak words when the apostle Paul declared, “For the kingdom of God is not a matter of talk but of power.” (1 Cor 4:20 NIV)
Why Is This a Problem?Absolutely, we are forgiven. And thank God we are. God has always given a way for sincere seekers to be forgiven. The Old Covenant offered many ways to sacrifice and receive forgiveness. But the people had to make the same sacrifice again every year because, though they were forgiven, they were not changed.
Certainly, Christians are not anywhere near perfect. And we won’t be perfect until we pass through this life and see Him face to face. “We are already God’s children, and we can’t even imagine what we will be like when Christ returns. But we do know that when He comes we will be like Him, for we will see Him as He really is.” (1 John 3:2-3 NLT)
So What’s Wrong With, “Christians Aren’t Perfect…Just Forgiven”?The most dangerous word in this statement is the seemingly harmless word, “just”. To be just forgiven was exactly the dilemma with the Old Covenant. It was just forgiveness without transformation; just freedom without the power to stay free.
But the New Covenant is about so much more than just forgiveness! Christians are NOT just forgiven.
The true New Covenant is all about the great miracle – the miracle of transformation. This transformation is the result of Christ Himself, by His Spirit, living inside us, growing His image and nature in us from the inside out!
You Can’t “Join” This GroupTrue Christianity is the only major world religion that you cannot “join”. You can become a Muslim by adhering to the laws of the Quran. You can become a Buddhist by learning and working to travel the 8-fold path to Nirvana. You can convert to Judaism by learning the Law of Moses and joining a synagogue.
But you cannot join Christianity by simply signing up. You cannot become a Christian by memorizing the Sermon on the Mount, or agreeing to a list of church doctrines, or doing your best to obey the “words written in red.” (The words of Jesus)
You can only become a Christian by experiencing a miracle; the miracle of transformation by new birth. And you can only experience this miracle, this miraculous new birth, by inviting the Holy Spirit to come and live in you, making you a new creation. “Therefore, if anyone is in Christ, he is a new creation; the old has gone, the new has come!” (2 Cor. 5:17 NIV)
And the new birth is just the beginning! This on-going miracle of metamorphose (transformation) will keep growing until it culminates in us becoming fully like Him finally and forever!